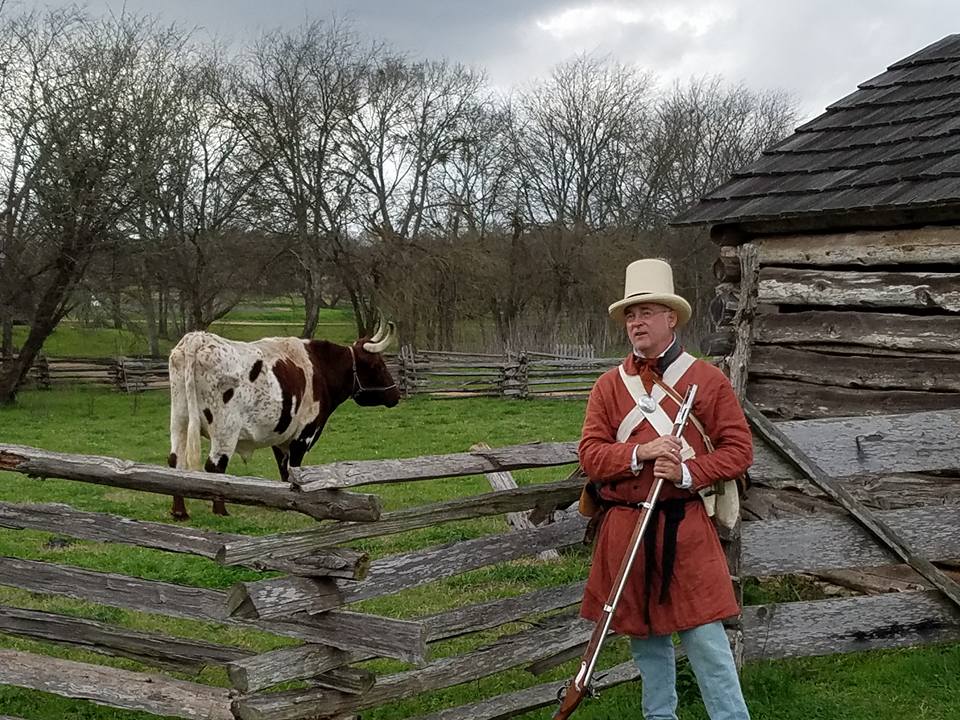 History is a subject in school. Some enjoy it, some study it, however, for Charlie Rhodarmer it is living history. One might say he has discovered a time machine, for at any moment, Charlie will take you back in history with historical storytelling in period costumes.

It is his calling, evident when you learn his personal history. Born in Haywood County, North Carolina, he was a typical boy that enjoyed the outdoors and participated in Boy Scouts, achieving the prestigious Eagle Scout. With a great interest in military service, it was around the age of 14 that he was introduced to Civil War reenactments,  and, as they say, the rest is history.

After high school, Charlie served in the 82nd Airborne. Being a veteran of our country’s military is a significant place of pride, and telling the world about the service of all men and women from the beginning to present is a passion. He received an associate degree in criminal justice from Haywood County College and a bachelor in science from Western Carolina University. While at WCU, Charlie began working at the Mountain Heritage Center.

Before, during and after his time at Mountain Heritage Center, Charlie would be introduced to many life passions. A trip to Fort Loudoun resulted in a lifelong commitment to being a living historian, with a solid involvement as a volunteer since 1988. It was also this time that interests like blacksmithing were ignited, for which he continues today. He has worked at the Scottish Tartans Museum managing exhibits, moving them when it relocated from Highlands, NC, to Franklin, NC. He designed the layout of the museum, building most of the interior himself. He also served as Curator in residence at the Scottish Tartans Museum in Comrie, Scotland, and several years as the exhibit specialist for the JFK Special Warfare Museum at Fort Bragg. His permanent position with Boys Scouts of America led to becoming the National Scouting Museum Curator in Murray, KY. When the decision came to move that museum to Dallas, TX., it seemed the next life stage would be in Texas. However, a conversation on the phone with his mentor would change the direction.

That phone call gave notice of a museum job opening close to his heart, the chance to tell the story of Sequoyah and the Cherokee Nation. All of his life paths from blacksmithing, Civil War reenactments, the Heritage Center, volunteering at Fort Loudoun and historical storytelling were intersecting at the Sequoyah Birthplace Museum in Vonore, TN.

From listening to recorded Cherokee stories at the Museum of the Cherokee Indian as a kid to sharing history through period clothing and reenactments, the Cherokee story seemed to always be entwined with Charlie. It seemed no matter what period he turned to, there was a Cherokee connection. World War I is a historical period that he holds great interest in sharing, having many period uniforms and regularly participating in reenactments. Charlie shared that during WWI, the U.S. 30th Division Infantry Regiments, which contained Cherokee soldiers from western North Carolina..

The U.S. Military Commanders in the area discovered that German troops were intercepting their telephone communications and attacking them. So they issued the tactic of having the Cherokee troops deliver messages in their native tongue. It was successful, as the Germans didn’t understand. The Cherokee “code talkers” were the first known use of Native Americans in the American military to transmit messages under fire.

Everywhere he turned, the story of the Cherokee was coming into his view. Since 2000, Charlie Rhodarmer has enjoyed that view, fulfilling the dream to be at Sequoyah Birthplace Museum. He has been featured on C-Span and all over the world as the Keynote Speaker for many museums and events. Often sharing in period clothing, “I have always loved history, having military uniforms and civilian clothing  from many periods. It’s fun to bring history to life.” Charlie remarked. And he really knows how, no matter the period or place, he makes the historical event, place or person come alive.

The connection to Sequoyah himself, from blacksmith to military service to educating others, is not lost to those who experience the living historian, Charlie Rhodarmer. He has faithfully served, for 18 years, as museum historian and director. The Sequoyah Birthplace Museum celebrated 27 years of history, heritage and culture this year. The museum honors the life and legacy of Sequoyah, the Cherokee Indian, who created the Cherokee syllabary. His passion to educate others on the Cherokee history is something he considers a great privilege. He will join the 2nd Cherokee Indian delegation to London at the end of this year, as they have been invited to participate in the 2019 New Year’s Day Parade in London. Charlie is honored to serve in the period costume of Lt. Henry Timberlake, the escort of the first Cherokee delegation to London.

It is difficult to capture the Charlie Rhodarmer story in an article. It truly needs the page numbering equal of the novel, “War & Peace.” They say success is to live your life doing something you love, and therefore Charlie is one of life’s most successful. He found the ultimate happiness living history for us all.