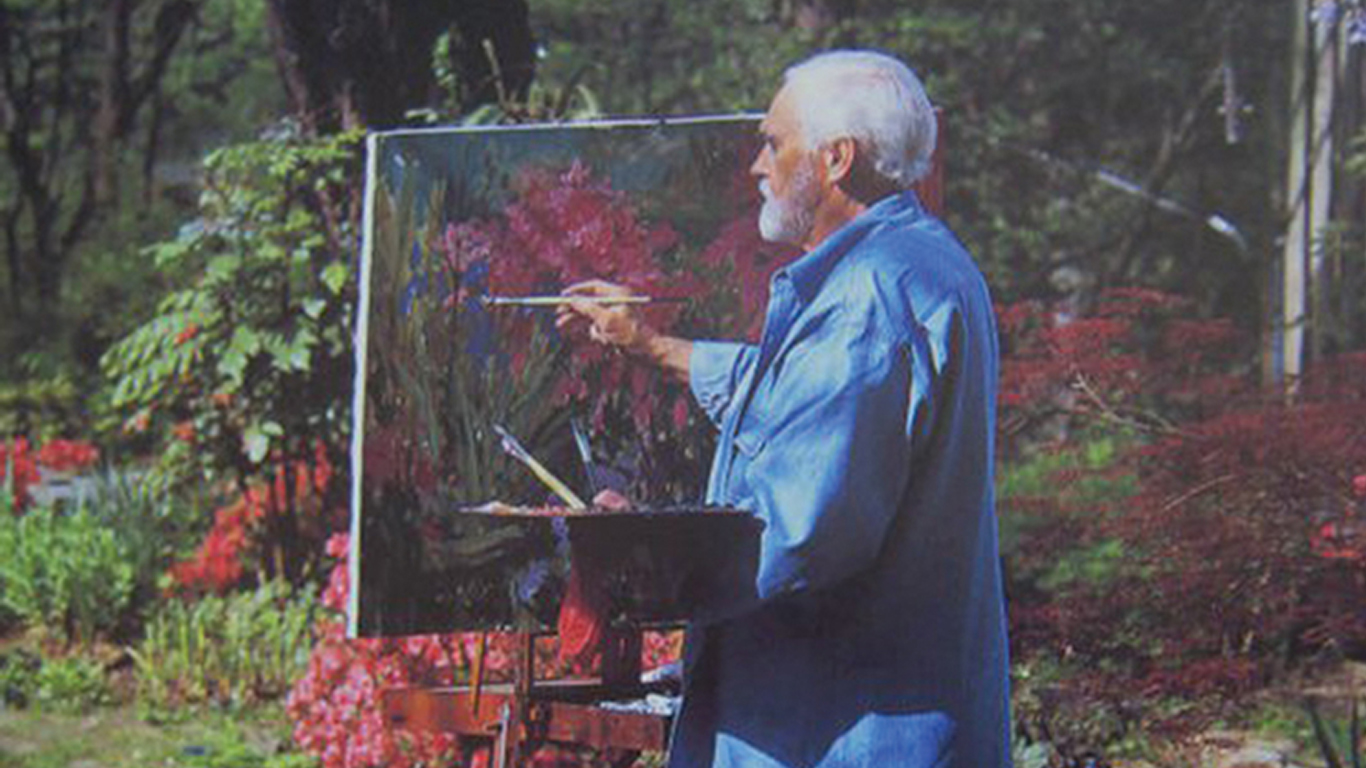 In space, they are together, ageless. Their image travels on a probe launched four decades ago, now sailing beyond gravity and time. Should it encounter life beyond the stars, a snapshot of their lives will tell part of the human story.

On Earth, it was Valentine’s Day, 2019. Jim looked at Fran through his thin-rimmed glasses. He took one hand off his walker and reached for her, and she helped him settle into his seat. They sat hand in hand, Fran’s nails polished a pale pink. A medical alert necklace dangled from her neck.

Jim and Fran Gray have been married 65 years. In January, they’d moved into an assisted living center in Bloomington, surrounded by dementia patients like them. In the living area, Billie Holiday was singing about all the old familiar places, and Jim sang softly along. “I’ll be seeing you…”

In the distance, three large paintings covered one wall. They show a parade bustling down the street – balloons and confetti, dancers and trumpets. Overhead, two spacecrafts streak across the sky. Jim started painting them when he turned 80 and dementia began to creep into his mind. They weren’t his best work, but that wasn’t the point. Jim was a nationally renowned artist whose landscapes and seascapes continue to hang on the walls of homes and galleries around the world. But when his hands lost their dexterity and his memory started to slip, he painted a series of three canvases called the “Joy of Life Parade.” His earlier paintings were for others. These paintings were for himself.

Every character, from the two men balancing on unicycles to the fisherman casting his rod off the back of a pickup truck, is a person he knew. He painted them — all the old familiar faces — because he was afraid he might soon forget.

There’s a long-legged woman in a yellow, skin- tight leotard and matching yellow heels. The red on her lips complements the red feathers in her grand, bejeweled headpiece. That’s Fran. The center of the painting and of his life. Now Jim is 86 and Fran is 85. In the assisted living center, Elvis is singing “Love Me Tender.” “Way to go!” Jim tells Elvis. “Shush,” Fran says.

Jim met Fran when he went with two Air Force buddies to visit her hometown in Illinois one night. Fran and two other young women pulled up in their car, and his friends talked to the ladies in the front seat. But

Jim wanted an introduction to the third girl, sitting in the back. The streetlight lit up her face, and Jim stepped back to take in her beauty. His Frannie. “I just sort of fell in love with her first time I saw her,” Jim said.

Fran has been an anchor for Jim ever since. They married and had three children. Art fueled their family.

Their daughter Laurie, who eventually became an artist herself, remembers playing a game when they traveled. On her website, she describes how they took turns pointing to something out the car window — a beautiful sky, for instance — and describing what brushes and colors they would use to paint it. Alizarin Crimson? Prussian Blue? Laurie says the game taught her how to see quickly and retain what she saw in her head.

When Jim asked Fran’s opinion on his art, she’d answer honestly. When he wanted more opportunities for people to see his art, Fran suggested moving to Gatlinburg, Tennessee, where they would later open the Jim Gray Gallery. When he decided he needed to step back and focus on the creative side of his artwork, she took over running
the gallery.

They were playful and pranked each other. They taught their kids never go to bed upset, and they showed them what it means to love another person. When Jim’s dementia started setting in, Fran became his primary caregiver. Now in the assisted living center, she continues to hold his hand. She loves being surrounded by his art. It’s in her bedroom, the living area, the hallways. “They’re all my favorites,” she said.

In the parade painting, a policewoman is smiling, a badge on her sleeve and paintbrushes in her holster. That’s Miss Clyde Kennedy, Jim’s high school art teacher. Jim is the boy on the tricycle in the aviator helmet and goggles. One of his earliest memories came when he was 4 and felt the wind brush his face as he raced over a bridge. He felt like he was flying. Beside his younger self, Jim painted his childhood neighbor, Mr. Galyean. Like most kids, Jim has loved drawing since he was old enough to hold a crayon. But he didn’t know he could make art for a living until he was 11 and Mr. Galyean gifted him with art books, brushes and other supplies, giving him the push he needed.

Jim painted for art shows and sold thousands of paintings and prints worldwide. He even carved a larger-than-life sculpture of a barefoot, smiling Dolly Parton that still stands outside the courthouse in her Tennessee hometown.

As clocks tick and Earth continues its rotation around the sun, art captures a moment in time. Jim believes it also captures joy.

“The pure joy of creating something that ‘you’ want to make, just for that pure purpose alone, sets it aside from all the other made things, and it is ‘art,’” he wrote a few years ago. In the corner of the “Joy of Life Parade,” the two space probes race through the dark sky.

In 1967, a man named Jim Amos showed up at Jim and Fran’s Gatlinburg home, camera in hand. He was a photographer for National Geographic working on a story about artists and craftsmen in the Great Smoky Mountains and happened upon the Jim Gray Gallery.

It was a chance encounter between two explorers. Amos took a photo of Jim sitting at his easel painting a landscape. In the forefront, Fran tends a fire in their big red fireplace, with Mama Cat lying on her lap. A moment of their life frozen in film.

A few years later, NASA began plans for the Voyager I and II, two space probes created to explore the outer reaches of the solar system. Astronomer Carl Sagan was assigned the task of recording the sights and sounds of Earth onto golden records that would travel with the Voyagers into space. The thought was that if extraterrestrial life ever captured one of the Voyagers, the records offered at least a chance to communicate with them, to tell the human story.

Each record contained 115 images, natural sounds and music selections representing the planet and its capabilities.

Jane Goodall and her chimps. The Great Wall of China. Compositions by Mozart and Bach. A time capsule for the universe.

In a stroke of what Jim called “pure luck,” Sagan also included the photo of Jim and Fran. It represents man and woman and domesticated animals. The red fireplace shows Earth’s oxygen-based atmosphere. And Jim painting in the background shows man’s creative drive. The Voyagers launched in 1977 and remain in space today, on a journey without end.

Jim has long suspected Alzheimer’s might be in his future. His father Jerry had suffered from the same disease. One day, a few years before Jerry died, the two were walking down the road when Jim’s father turned to him. “What’s your name?” he asked. “It’s Jim.” “Well, I have a son named Jim,” his father said.

Jim Gray spent much of his life trying to capture the fleeting shadows cast by trees as the sun moved over the Great Smoky Mountains. He knew time would not stop for him, but he hoped his art would outlast him.

“He has literally recorded his memories outside the confines of his brain,” his son Chris, 59, wrote in an email. “Long after Jim is gone, his memories will remain on walls all around the world.”

It’s hard to tell how much of the “Joy of Life Parade” Jim remembers now. Some days his memory is stronger than others. Some days he, like his father, can’t remember the names of his own kids. Now when he paints, volunteers set newspapers underneath his canvas, and his art isn’t precise. But he still paints with the same concentration, and the colors are just as lush.

But he made no move. It was like his body was waiting for instruction from his brain, but his brain wasn’t answering. They wanted so badly to understand each other. Fran leaned toward him, holding his hand. Jim’s other hand held her face as he tried to pull himself as close as he could to hear her.

It was no use. Finally Fran stood up and started making her way out of the room. A moment passed, and Jim said, “Where did Frannie go?” As if that was a signal, a nurse came in and told Jim he was going to follow Fran and head to bed. They shuffled along, Jim with his walker, Fran with her cane. They came to the elevator. The elevator would take Fran to her bedroom on the second floor while Jim continued to his first-floor room. This was the spot where, every night, they said goodbye.

Fran stopped walking. Jim kept going. Then stopped. “Fran?” He had forgotten. He thought Fran was going to bed with him,
as she had for 65 years. “Fran?” The nurse assured him she would come down and say goodnight in a bit. It was the only way to get him to go to his room. “Fran?”

Jim took one hand off his walker and reached for her. Fran paused between the open elevator door and his outstretched arm. Go ahead, the nurse told her. I’ve got him — you go ahead.

A drawing of Fran 20 years ago, hangs on the wall of Jim’s bedroom. In it, she squats in the garden of their Tennessee home. She’s planting flowers, trowel in hand. When Jim thinks of his Frannie, his son believes, this is how he remembers her. Neither have aged past this point in Jim’s mind. He still sees himself as a younger painter sometimes. And as the dementia tightens its grip, he has a hard time reconciling the Fran he sees sitting next to him and the Fran in that drawing.

As they each drift to sleep in their separate rooms, somewhere the Voyagers charge through space. They have been in space for 41 years, while on Earth Jim and Fran raised three kids, moved 11 times and sold thousands of Jim’s pieces.

Scientists say that in interstellar space, free from the destructive forces of gravity and the atmosphere, either Voyager could last for billions of years. One day, they say, the probes could be the only remaining evidence of life on Earth. Some nights,
Jim and Fran’s son Chris will step outside of his rural home in Maine and look up at the night sky. The clear nights there show the vastness that surrounds us all – the stars that have blinked down on us since mankind first looked up. He’ll think about his parents’ photo up there, past the man-made satellites and aircrafts, past the planets and asteroids. A moment preserved forever. He’ll think about how his father’s life has been devoted to capturing moments like this through art.

On Earth, the years hurtle forward, and Jim and Fran’s memories retreat. And Chris imagines Voyager I spinning through space, where his parents are youthful and creative and together for what might as well be an eternity. He likes to look into the dark sky and wonder, “How far is it now?”

It is 13.4 billion miles away, and moving fast.